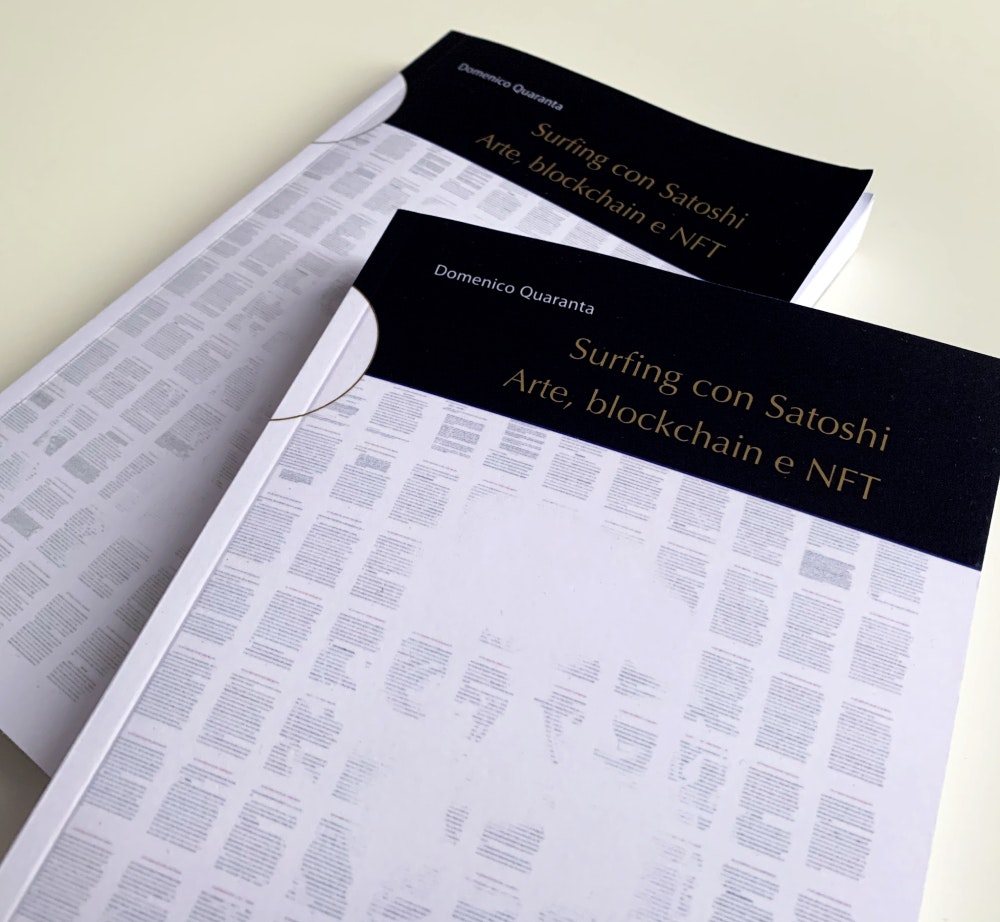 Surfing with Satoshi. Art, Blockchain and NFTs
surfingwithsatoshi.mirror.xyz
To add or not to add more blocks to the chains
0x1173
December 24th, 2021

Sometimes I feel like a weather vane, unable to take a clear stand for or against anything. By attitude, I’m more prone to take a neutral position, to evaluate pros and contras. This has happened to me several times over the course of this odd year. My book Surfing con Satoshi. Arte, blockchain e NFT, soon to be translated into English, is all about that.

Make no mistake: I’ve made my mind very clear over the last few months, about what I like and what I don’t like about blockchains and crypto. I don’t like 99% of what people call “crypto art”, which is for the most part the result of the crass choices of investors who pretend to be collectors, and who have persuaded makers unable to win a call or pass an admission test to be great artists with the weight of their money. I’ve never felt very comfortable in the art world, but I feel totally out of touch with this art world, that talentless artists, start-ups with no history and investors with no culture are giving birth to. I don’t like and don’t use the term “crypto art”, which ties art to a currency and an exchange system, and robs it of the right to be, as it should be, something absolute. I don’t like the assumption that NFTs certify the authenticity and uniqueness of a work of art, when the only things they can really prove are its ownership and provenance (mostly traceable to an anonymous crypto wallet or a verified nickname on Twitter). I don’t like the fact that, in the NFT space, you only count for what you have in your wallet, in terms of cryptocurrency, social tokens, assets. I don’t like that, to participate in this space, the first move you have to make is to invest and trade in cryptocurrency. I don’t like the pyramid structure where those who enter, with the promise of autonomy and financial success, mostly end up funding the success of those already at the top. I don’t like that success is always and only tied to sales, and that the latter depend on hordes of individuals who raid rather than collect, to immediately put back for sale what they raided. I can’t stand that art is seen and used explicitly as a tool to promote and clear cryptocurrencies. I can’t stand cryptoevangelists because I can’t stand evangelists of all kinds. I can’t stand the false promises of web3, particularly the false rhetoric with which it opposes the Platform Economy and the exploitation of data in social media: when NFTs do nothing more than capitalize on the attention gained in web 2.0 spaces, and only achieve success through skillful, constant and shameless use of the self-promoting potential of the latter.

All of this makes me very sensitive to critical readings of blockchain culture. I read them avidly and, in most cases, feel them as my own. If I can’t completely sympathize with Brian Eno-like populist simplifications, I have no trouble recognizing myself in the informed analyses of Geraldine Juárez, Martin O'Leary, or the evergreen Gerard David. And yet, I feel in trouble when I reach their conclusions. O’Leary:

“The promotion of cryptocurrencies is at best irresponsible, an advertisement for an unregulated casino. At worst it is an environmental disaster, a predatory pyramid scheme, and a commitment to an ideology of greed and distrust. I believe the only ethical response is to reject it in all its forms.”

“I don’t have any kind of counter-paradigm or “proposal” against NFTs specifically: I’m more inclined to do nothing about it, to refuse participation in the process of capitalisation, and simply not add more blocks to the chains.”

I’m feeling in trouble, first and foremost, because in the blockchain and NFT space there are things that I like, too. Although I perceive most references to the early Web of the Nineties, and to the distributed networks designed in the Sixties, as rhetorical, instrumental and promotional, I like that many are looking back at this moments as models for the future web. On the level of community, I often perceive a genuine optimism that does not depend exclusively on the flood of money, and that’s contagious. There is a vision of the future, that one might not completely agree with, but that sounds nonetheless refreshing in a sad, depressed present that seems unable to look forward. I like that criticism is often accepted rather than rejected, and that it’s turned into a starting point for new projects and developments.

Furthermore, people that I like joined this space. Some of them have been exploring the community potential of DAOs, shaping platforms of exchange rather than commodification, investigating how smart contracts could bring more equity in the creative economy. A lot of art that I like was brought onto the blockchain, sometimes using it as a distribution model, sometimes as an experimental ground for exciting new projects.

As an art critic and curator, I feel compelled to follow the artists wherever they may go. It’s not just a matter of FOMO. Sometimes you just have to be where things are happening, or miss them altogether. Between 2006 and 2010, Second Life was the place to be if you wanted to be part of the vibrant art scene that was taking shape in there: and this, despite its ugly graphics, it’s accelerated commodification, its raising, unregulated, capitalist economy.

Finally, I don’t think there are cursed technologies. A technology evolves according to what we make out of it. The blockchain isn’t born as a hyper-capitalist technology, it became one. Bitcoin has not always been the new gold. In one of the darkest moments in the history of the internet, Aaron Swartz famously said:

Blockchains and what Juárez calls blockchain culture have been shaped, so far, by a relatively small community. This community – I’m not naive about that – is now a ruling élite. Can an expansion of its social basis transform the technology and its culture? Is joining in a responsible option? Or is just the consequence of “the capitalist hypocrisy of always refusing to take a thing for what it is”, as René Magritte writes in a wonderful text quoted by Juárez?

I don’t know. Magritte denounced yet participated in Bourgeoisie Art. On the visual level, what has been happening along 2021 changed the visual landscape of the blockchain beyond recognition – see the explosion of generative art prompted by Artblocks as an example. Curating and criticism entered the space and changed it as well. So far, I’ve been cautious in adding more blocks to the chains. I bought some eth and tezos to explore platforms and to see what does it mean to collect in this space. I ran the race to join Mirror and see what being part of a platform feels like. I minted some quite unpopular texts in here. I curated an exhibition for Feral File, a platform that I love because it has been founded by someone who has been shaping digital culture and aesthetics for decades, and who has a strong sense of community; and because the first thing Feral File generates is not a sale but a gift (all artists in the show are gifted an edition of all other artworks in the show).

Curating is a heavy word in this space, as it means inviting others – artists you love – to add more blocks to the chains. Yet, hasn’t always been like this? Curating for a commercial gallery, an art fair or an auction house may mean to invite artists to join an art market, a set of rules and behaviors. Curating for an institution may mean to invite them to support an institutional system of public and private founders, to explicitly or implicitly advertise a sponsor, to wash the money of some dirty donor or board member. When he made Shapolsky et al. (1971), Hans Haacke was ready to show it at the Guggenheim Museum; he was ready to add blocks to a chain that had the Shapolsky family among its supporters and beneficiaries. It was the chain that was not ready for that.

If in doubt, this text is not minted.

Featured image: A Rose by Any Other Name by Kamilia Kard.